How To Draw A Chibi Fox 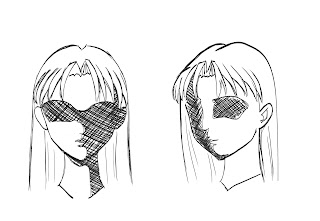 There are various ways to draw anime hair. This tutorial will give you some tips on drawing hair on your character.

This tutorial can be used for traditional mediums or digital mediums. 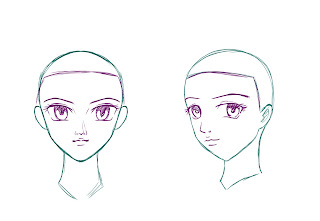 Step 1:
Have your head outline ready for the hair sketch. As you can see in the image the model has a hairline guide to show where the forehead will end. I have here two perspective of the model to show how the hair will look in these different perspective. 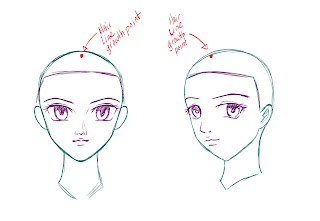 Step 2:
I generally put a little dot somewhere hear the middle of the model’s head, to give me a guide on where the hair will start to grow. Now hair doesn’t grow from one place naturally but it helps to have this guide point for the direction the hair would grow from. 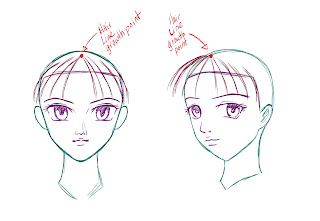 Step 3:
For these steps we’re going to just do a straight hair style. Starting with sketching the bangs, from the guide point draw slight curves downward towards the character’s eye brow. If your bangs are longer then draw your bangs the length you want. For now we’re going with short eyebrow length bangs. 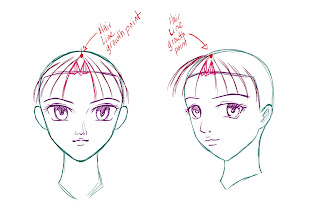 Step 4:
I like to draw my bangs split apart so going to add the hairline grow curve. As you see in the picture it is drawing in bright hot pink. I added some strands of hair to give it a more detailed look as if the hair is growing out of the  head. 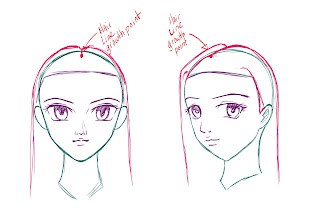 Step 5:
Now to draw the outer hair. Since I’m drawing digitally I made the bang layer invisible so I can work on the outer hair layer.

From the guide point I start drawing a curve upwards and then down following the outline of the skull. (Front facing) Since this hair is split in from the  middle of the head I do draw the same outline on the other side to try to give a symmetrical look. However it’s alright if each side aren’t identically the same.
For the side view, starting from the guide point I draw somewhat of a cane line following along the outline of the skull. Then right at the tip of the head I draw a slight backwards 7. This gives the look of hair flowing down the other side of the head. 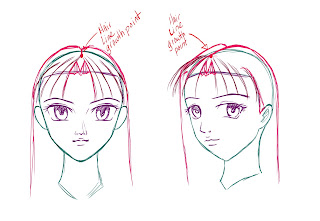 Note:
As you can see I made the bangs visible and you can see how the flow of the hair is starting to come together. 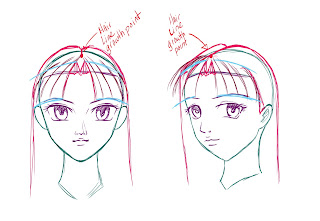 Step 6:
In this image I have a sky blue outline showing me where the bangs begin and end. You don’t have to do this but you do need to take note on where your bangs ends and begin to complete it. 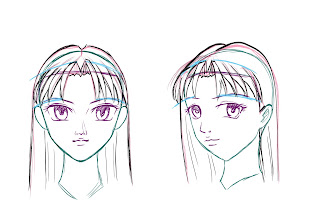 Step 7:
Going over with a darker shade of pencil or if you are digital dark shade of color preferably dark grey or black, trace over the sketch and add in detail where needed. Here I added the end points for the bangs and extra strands of  hair to show hair texture making the hair look not so flat.

Final:
Ink and erase stray pencil marks and sketches and you have your final draft of work. There are several styles of hair to draw and generally it takes a lot of field study to emulate the hair style you want. 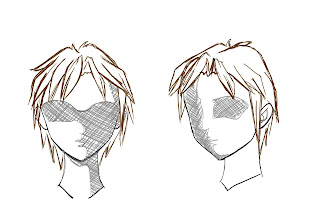 Examples of other hair styles:
Semi spikey hair: Using the same center point to make this hair style instead of curves I added in some soft angles though it looks like sharp angles. 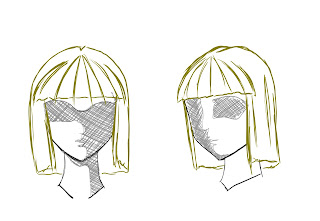 Straight Bang Shoulder Length: Generally used to for characters with shy and quiet personality. Or even the creepy doll look. 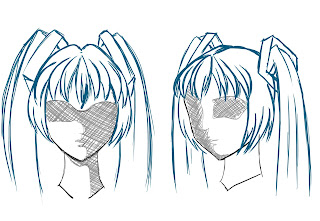 Hatsune Miku:  Because everyone seems to love pigtails. Following the same example of the straight hair instead of drawing the hair falling back add pigtails on the side of the head and have it flow down. Don’t forget Miku’s signature barrettes. 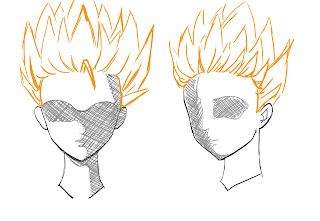 Super Saiya-jin: Because we all want super spiky hair that defies every aspect of gravity and physics. 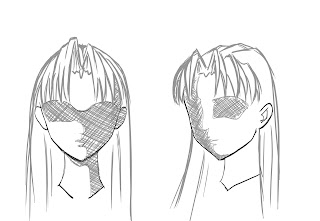 Silver Surferboy Complex: Kunzite, Sephiroth, Yue, Sesshomaru, you want long haired silver/white in color. Though the most noted anime guy sports these hair style, anime girls can be found with this style too. A unisex hair style you might say.

There are many other ways to draw hair and many other hair styles to draw. Experiment with it and have fun.