How To Draw A Chibi Fox

How to Draw Anime/Manga Face

How To Draw A Sleepy Kitten

How to Draw Anime/Manga Face 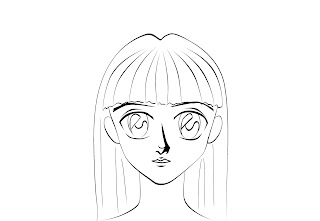 This tutorial will show you some step by step instructions on how to draw a simple anime or manga face. For this particular tutorial I’m going to make a female face,  though these steps can be used  to make a male face, or chibi faces as well.

I will add step by step instructions for traditional mediums as well as digital considering I use these steps in drawing my characters on both traditional and digital.
This tutorial will cover mainly forward facing profiles. There will be another tutorial covering angles and side views in the very near future.

What is required:
If you are using traditional  mediums you would need to have the following:

If you are using digital mediums make sure your painting program allows you to use layers. MSPaint is not recommended. The following recommended programs are: 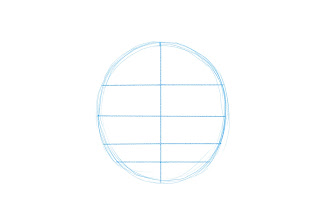 Step 1:
Traditional: With your non-photo blue pencil draw a circle. Doesn’t have to be a perfect circle but if you are not comfortable drawing a circle you can get something round and trace the circle out. This will be the base of your face. Add guidelines to help you know here the face details will be.
So draw a line half way down the circle where you will get two parts vertcially. Then half way across horizontally. You should have four parts.
From the top of the circle find the halfway point  from the top to the middle and draw a line across.
Do the same from the bottom to the halfway point. Then again from the bottom to the second half way point.
What you should get is the diagram above.
Digital:  This should be a layer on it’s own. Name it blue sketch and make a blue circle outline. You can do this normally if you have a tablet or just use the Ellispe tool and make a circle. Do the same thing as stated in the traditional method and make guidelines halfway through the circle. You can use SHIFT to make straight  lines if you are OCD on  how the lines look. 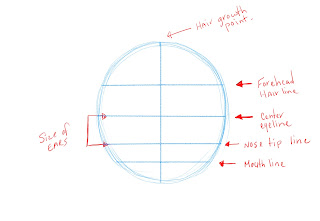 Notes:
Before we continue on here are some notes about the guide line. At the top of the circle where the halfway point starts this is used as reference on how the will grow out of the head. It will be a guide point to  drawing your hair.
First guideline down is the hairline reference. This is where the forehead  stops.
Second guideline  is considered to be the eye reference where you place the eyes. Usually it’s were the middle of the eyes would be. For this tutorial it is going to be reference as where the top of the eyelid is drawn.
Thrid guideline is the nose guildeline. Could be the point of  where the nose is or the base of the  nose. Depend on the style of nose. The nose for this tutorial will be a bit lowered.
The last guideline is for  the  mouth.
The side bracket shown is the size of the ears. The size should be between the eye guideline and the nose guideline. 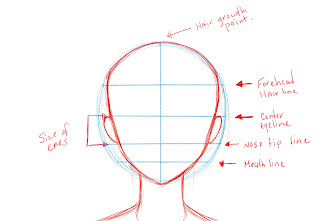 Step 2:
Traditional: Take your HB pencil an start drawing out the head outline.
Digital: Make another layer on top of your blue layer, name it “Red Sketch” or something similar. Use a paintbrush tool or a pen tool set your color to red and draw a head outline. 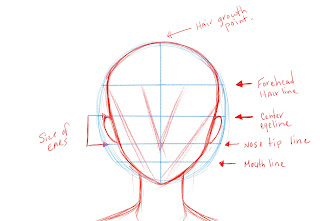 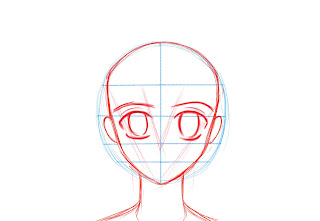 Step 4:
Traditional & Digital: Sketch in your eyes between the lines of the “V”. Notice where the outer “V” line is and use that guide as your were the outer corner of the eye should end. The inner “V”  line should be where the top of eyelid will end as this will signify the bridge of the nose. Your eyebrows should be in the middle of the eye-line guide and the hairline guide. 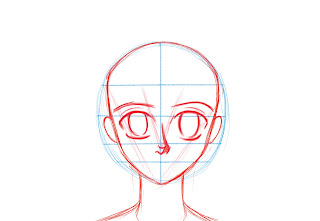 Step 5:
Traditional & Digital: Now sketch in the nose. Here I added a little shadow to the nose to show where the sun would shine. So the light source would be coming from the left side of face. You can draw the shadow opposite or not draw shadow at all. 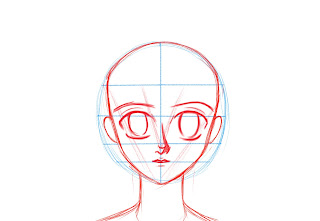 Step 6:
Traditional & Digital: Sketch in the mouth. Do not make your mouth wider than the “V” guideline. Unless you’re going for the rape-face look for your character the mouth shouldn’t  be bigger than the guideline. 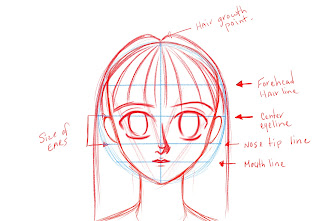 Step 7:
Traditional & Digital:  Time to draw your hair. There are various ways to draw hair, especially if you’re drawing anime and you want your characters hair to be crazy spikey or extra long. Right now for this tutorial we are going to just focus on straight shoulder length hair. From where the top of the head you will use this guide as were the hair grows. So from the middle draw the outer hair.
From the same point start drawing  curves downward to make the bang lines. This serves a reference for  when you do your final draft on how your bangs will flow.

Final:
Traditional: With your 2B pencil trace over the  sketch  lines. Add in any extra details you would want in to the picture, like the pupils for  the eyes the ends of the bangs, extra strands in the hair.
After wards  use your ink pens and go over the detailed draft. Let the ink dry.
After the ink has dried grab your kneaded eraser and gently erase the pencils markings. The kneaded  eraser should only pick up graphite and some of the non-photo blue pencil markings leaving you with the ink outline.
Digital:  For our digital users make another layer name it “INK” and choose a hard round brush or an inking brush and trace over your red detail draft. You can do this by hand if you have a tablet or use the pen tool in Photoshop. If you are not using Photoshop, stabilizers work very well for hand inking in Manga Studio and PaintToolSAI. Other programs use something  that is similar to the pen tool used in Photoshop and trace the outlines and stroke it’s paths. If you are not familiar with the pen tool here’s a tutorial on how to use the pen tool.
Here’s also an old video tutorial on one of the ways to ink in Photoshop.