How To Draw Gohan - Draw Central

Artists Of The Week 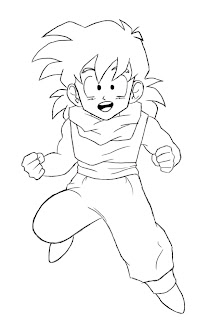 So, even though I’ve put it off a bit, let’s get started! 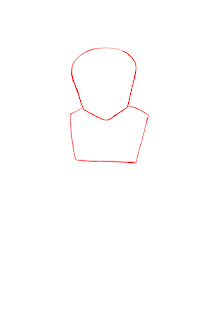 To get Gohan started, draw a small square for his chest, with another smaller oval on top for his head.

Be sure that the oval of Gohan’s head ends in a point at the bottom to form his chin. 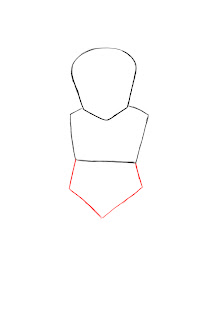 Draw another triangular shape below Gohan’s chest which will be his midsection/hips. 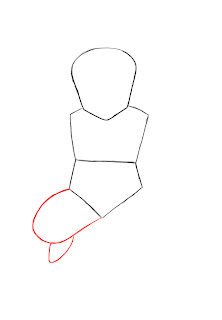 We are now going to work on Gohan’s legs.

To get his first leg started, draw a small oval sticking out at an angle from the triangular shape you drew in the previous step.

At the end of this oval, draw another very small oval which will be his foot. This will create the effect that Gohan’s leg is bent inward. 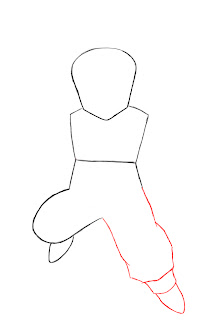 Use the same process to draw Gohan’s other leg, except we will be making this one about twice as long as his other leg to give the effect that it is pointing straight down. 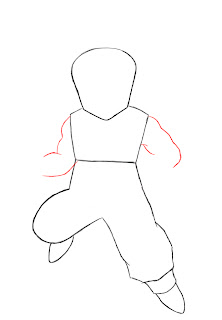 Follow the lines in red shown in the image on the left to give Gohan his arms. 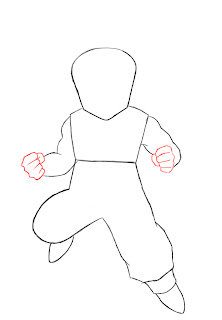 At the end of each arm, we need to give Gohan a clenched fist. 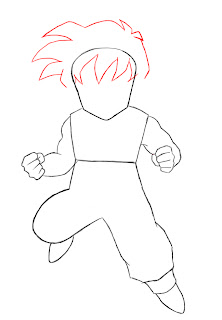 We are going to be drawing Gohan’s hair in two sections. The first section shown on the left, is that largest– which should be about halfway outside the border of his head.

Draw a few large clumps of hair hanging down toward the middle of Gohan’s face. 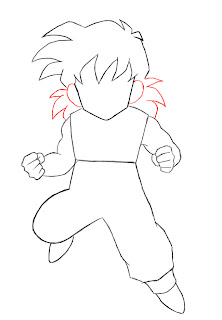 For the second section of Gohan’s hair, we need to draw a small clump of hair behind each of his shoulders, as well as give him two ears. 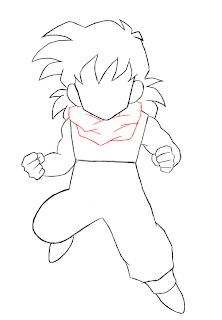 Give Gohan a thick scarf that will be hiding his neck. 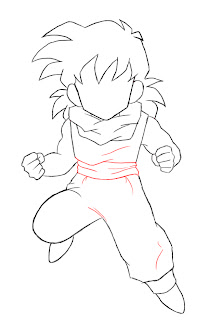 Draw in Gohan’s large belt, which should be just about as wide as his scarf.

Also, give him a few wrinkles in his pants. 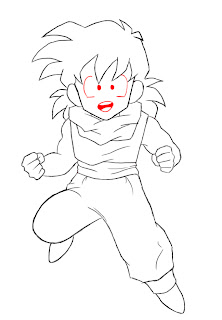 Gohan doesn’t really have fully formed eyes like many anime characters often do. Rather, we need to only draw about half of the outline of each eye, with two small pupils near the center of his face.

Also, give Gohan a small oval mouth which a little bit of teeth showing.

At this point, Gohan is pretty much complete. All that’s left to do is to give him a very small pointed nose, and draw in a couple eyebrows.