How To Draw A Fish - Draw Central

How To Draw A Snake

How To Draw A Fish

How To Draw A Bird Step By Step

How To Draw A Fish 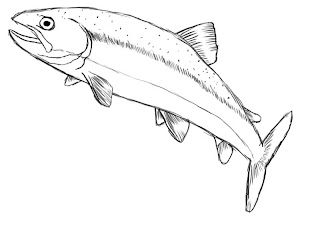 For today’s tutorial, I am going to teach you how to draw a fish. If you have ever tried to draw a fish before, and yours came out looking like the little fish bumper sticker you see on people’s cars, then this tutorial is for you! Let’s get started. 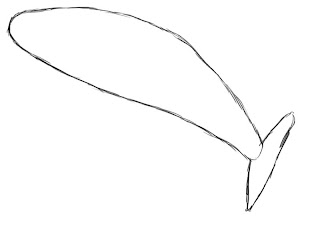 The first step in drawing a fish couldn’t be any simpler– just make a banana-shape with a flat triangle on the end. As you can see, this shape is widest in the middle, and is narrowest near the tail.

For this particular fish, the tail is very short and wide; be sure that your triangle reflects that. 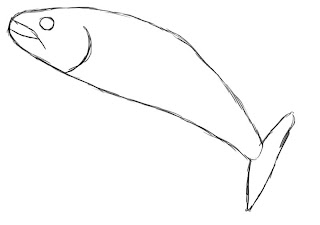 On the front 1/3 of your fish we are going to map out the features of the head. To do this, draw a backwards “C” shape to suggest a the gill, and a very simple circle will make up the eye of the fish.

Also, as you can see in the image on the left, I drew a triangle shape beginning near the eye, and continuing to the edge of the fish’s head. This is going to essentially cut out the empty space of the fish’s open mouth. 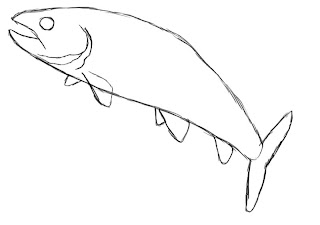 Next, we need to start adding fins to the fish. Make these by drawing about five or six small triangles running underneath your fish. The fins on the underside of this fish come in pairs, so make the fin that is facing the viewer larger, and the fin that is behind it just a small piece of a triangle to give the illusion that it is on the other side.

You can also see that I erased the line inside the fish’s mouth so that it looks like it is open. I also added a few more wobbly “C” shapes to gives the gills a more realistic appearance. 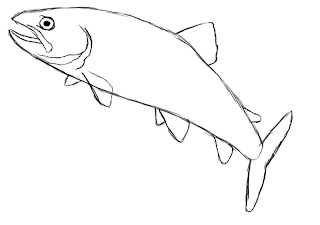 Draw the fish’s top fins by repeating what you did in the last step. The only difference is that there are only two fins on the top of the fish, and they do not come in pairs like the bottom ones. Be sure that when you draw the top fins, that the largest one is almost directly in the center of the fish.

Also, be sure to add a pupil to the fish’s eye, and a couple lines around the edges of the fish’s jaws.

At this point you should have a nearly completed fish drawn. Congrats! The last step in drawing your fish is to add the smaller details. As you can see in the image on the right, I added several fine lines in the fins to give them texture, as well as a couple bands that run down the side of the fish. Add a few spots, and that’s it. You’re done!

What’s great about this process for drawing a fish is that all fish are built from the same basic shapes. If you can master this tutorial and be able to draw this very basic fish, you can tweak it however you like to be able to draw any fish you can think of.

Thanks everyone! Hope you enjoyed this tutorial!